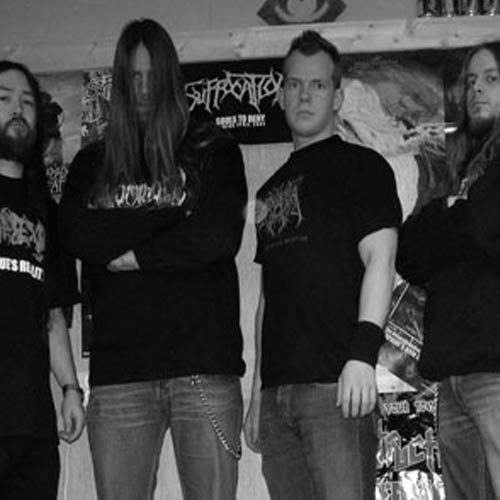 IMMERSED IN BLOOD emerged from the remnants of the Swedish Death metal band INVERTED in October 1998. Joel Andersson (bass) and Johan Ohlsson (guitar) decided to continue to play together but in an even more brutal direction. Vocalist Stefan Lundberg (also ex-INVERTED member) and drummer Jocke Unger decided to get immersed in blood in DecemberImmersed In Blood 1998. The death-roll was completed when Robert Tyborn Axt (guitar) joined the band in February 1999.

The band played their debut gig in March 1999 and only two months later, in May 1999, they recorded their debut demo entitled “Eine Kleine Deathmusik”Immersed In Blood, featuring four tracks of brutal bloody Death Metal. This demo was released in August 1999.

In November and December 1999 the band went to Germany and played some gigs after which they started to write new songs. Two of them was recorded in May 2000. These two songs was released on a 3-way split CD called “Sweets For My Sweet Chapter 1” (split with CONFESSIONS OF OBSCURITY and OUTCAST), along with the “Eine Kleine Deathmusik” demo. It was released by LOWLIFE RECORDS in late 2001.

At the end of January 2001 the band entered Studiomega to record 5 new songs and a cover, “We Have Arrived” (a Dark Angel song for a tribute album, which will be released by ARCTIC MUSIC GROUP). These 5 songs was released as a MCD entitled “Relentless Retaliation” on DOWNFALL RECORDS in late September 2001.